I was born on Dec 31st 1984 in Kaiserslautern in the west of Germany. I grew up there and finished secondary school (Gymnasium, the German equivalent to American High School and British A-Levels) with an excellent degree (Abitur Ø 1,0). As a pupil I took part in various extra-curricular activities in mathematics, physics, computer science and filmmaking and won several prizes in competitions in these fields. In this time I started to develop strong skills for working in teams on challenging projects. 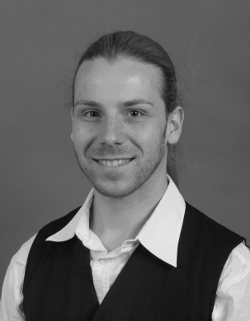 After graduating from school in 2004 I did some civil service for seven months at the Westpfalz-Werkstätten in Siegelbach. In autumn 2004 I started studying Computer Science at TU Kaiserslautern. Having studied Computer Science for four semesters I decided to change the subject of my studies and went to Mainz to start film- and theatre-studies at Johannes-Gutenberg Universität. Two semesters later I was able to add the minor fields of study in videogames and sound-radio by switching to Mediendramaturgie. In spring 2013 I graduated with a Diplom-degree marked excellent (German grade: Ø 1,1).

At university I had seminars on creative writing, the work of a cameraman, film-criticism and on Web2.0. I participated in the production of several short films and two stageplays and privately produced and directed two short films, a music video and a play. The biggest part of my studies was analysing films, pieces of theatre and videogames. I attended seminars and lectures on a large range of topics from Antique Greek Theatre to television series of today. The diversity and plentitude of the productions I analysed during my studies enables me to criticize nearly all narrative media and develop ideas for them. As I have also studied computer science for two years I am easily able to understand the technical conditions of the production of narrative media like computer games or special effects in films. I can testify this with my innovative thesis, where I developed a system to automatically position a game camera based on the rules of filmmaking.